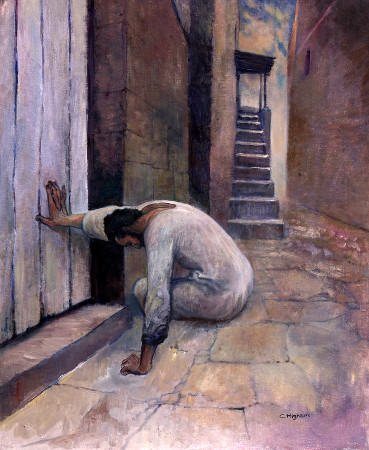 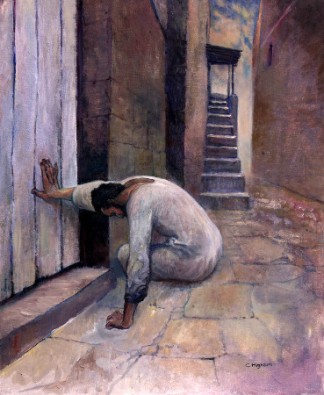 While all this was going on, Peter was down in the courtyard. One of the Chief Priest’s servant girls came in and, seeing Peter warming himself there, looked hard at him and said, “You were with the Nazarene, Jesus.”
He denied it: “I don’t know what you’re talking about.” He went out on the porch. A cock crowed.
The girl spotted him and began telling the people standing around, “He’s one of them.” He denied it again.
After a little while, the bystanders brought it up again. “You’ve got to be one of them. You’ve got ‘Galilean’ written all over you.”
Now Peter got really nervous and swore, “I never laid eyes on this man you’re talking about.” Just then the cock crowed a second time. Peter remembered how Jesus had said, “Before a cock crows twice, you’ll deny me three times.” He collapsed in tears.     Mark 14:66-72   The Message ”

As Jesus predicted, Peter denies his association with him. Jesus also predicted the same for all his other disciples, but Mark doesnt narrate their betrayals. Peters is interwoven with Jesus trial, thus contrasting true confessions with false ones. Peters actions are first described at the beginning of the trial, making this a sandwich narrative technique employed so often by Mark.In order to emphasize the faithlessness of Peter, the nature of his three denials increases in intensity each time. First he gives a simple denial to a single maid who claims that he was with Jesus. Second he denies to the maid and a group of bystanders that he was one of them. Finally, he denies with a vehement oath to a group of bystanders that he was one of them.It is worth remembering that according to Mark, Peter was the first disciple called to Jesus side (1:16-20) and the first who confessed that Jesus was the Messiah (8:29). Nevertheless, his denials of Jesus may be the most vehement of all. This is the last we see of Peter in Marks gospel and its unclear whether Peters weeping is a sign of repentance, contrition, or prayer.

This painting  by Chris Higham captures the broken Peter following his denial of his friendship with Jesus. Chris  has  painted  the disciple in as low a position as he can get. Down the steps in an dark alleyway , a desolate Peter his hiding away, crouched in a doorway. His hand against the door stopping him totally collapsing on the ground.

I am NS Priest , Wife, Mum and a hairdresser. My friend has a great name for me prayers and layers. I love taking photographs and this blog is a way of sharing them. View all posts by MPH