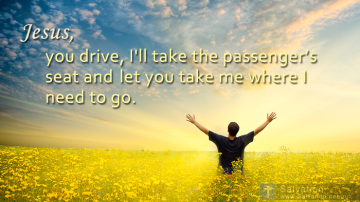 Is God in your driving seat?

Last week we had Jesus being tempted/tested by Satan. Satan appears again this week, but in the person of Peter who seeks to prevent Jesus from doing what he must do.
Why does Peter do this? He has not “set his mind on” the things of God, but on human things. Jesus’ harsh critique of Peter involves more than just the few words spoken on this occasion. Jesus say to Peter” Peter get out of my way! Satan ,get lost! you have know idea how God works.Even after the clear words from Jesus, Peter still hasn’t got the proper picture. He needs an “attitude adjustment”. He is seeing with “human eyes” rather than through the will and eyes of God. He tells Jesus what is and what is not going to happen — typical of first-born children? He wants to be a leader, not a follower. Are we ever guilty of having such attitudes?

Jesus then proceeds to tell those around him the following him how things will be.
“Anyone who intends to come with me has to let me lead.
You are not in the driving seat, I am.”

Something that is not always easy to let somebody else be in the driving seat. As Christians we must accept that God is in the driving seat, he has our route planned from the very beginning. I take you back to the words we heard a couple of weeks ago “ this is my son ,listen to him”

God is in the driving seat.

Being a follower of Christ means making sacrifices, the disciples left their families, not knowing where they were going or what they would end up doing. Following the teachings of Christ doesn’t make for an easy life,it is not a paved road to wealth and an easy life.It involves hard work, persecution,deprivation and deep suffering.
Peter saw only parts of the picture and we must be careful not to make the same mistake.

As Satan tempted Jesus, life brings us many temptations, the temptation to turn away in time of difficulties when the cross gets to heavy to carry. At times it is so hard to love your neighbour. The message says ‘we must not run from suffering’ our suffering and the suffering of others. Jesus calls us to embrace suffering. He says follow me and I will show you how. Self-help is no help at all. Self-sacrifice is the way, my way, to save yourself your true self. Jesus wants us to choose to follow him rather than lead a life of sin and self-satisfaction. He wants us to stop trying to control our own destiny let him direct us as I said before he is in the driving seat and he knows better than we do what real life is about he also submission, He asked us only to lose our self-centred determination to be in charge.

Jesus addresses the crowds saying “whoever wants to be my disciple must deny themselves and take up the cross and follow me”. We wear the cross of Christ crucified from our baptism, we carry his cross and as I said last week we cannot walk away from this cross it is with us always whether we remain faithful.
Jesus call us to self-denial so that we may continue to evolve spiritually as God intended. By learning to lives together unselfishly in this life, we may be preparing ourselves for the next great evolutionary leap forward, when individuals willingly sacrifice all so that we may live together in love. If you had begun to imitate Christ, you are ready for the next step in the great adventure of life the God puts before us here for.
We have a duty, we are trustees not of the church but of the christian faith. we are responsible for the continuing faith in this place and in the country, so no pressure. When reading compline at Abbotsbury I was reminded of the benedictine monks who did the same nearly a thousand years ago. Will there be a christian community here in a thousand years time.? if we do as jesus directs and we continue to carry his cross, listen to God and do his bidding and above all let him, God, be in the driving seat. 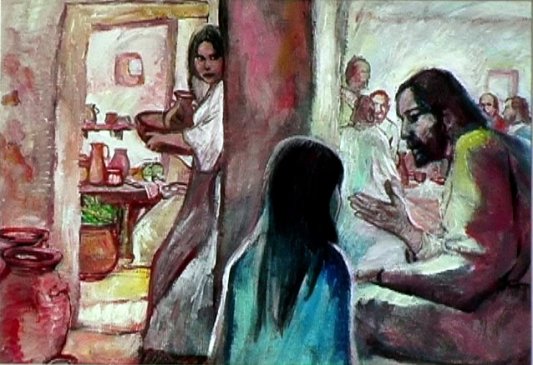 “Now as they went on their way, he entered a certain village, where a woman named Martha welcomed him into her home. She had a sister named Mary, who sat at the Lord’s feet and listened to what he was saying. But Martha was distracted by her many tasks; so she came to him and asked, “Lord, do you not care that sister has left me to do all the work by myself? Tell her then to help me.” But the Lord answered her, “Martha, Martha, you are worried and distracted by many things; there is need of only one thing. Mary has chosen the better part, which will not be taken away from her.” (Luke 10:38-42)

Was Mary the first feminist and yes, Martha is vacuuming but did she want to sit a the feet of Jesus as well? and go against convention.

Why this picture, well it brings the story to today, 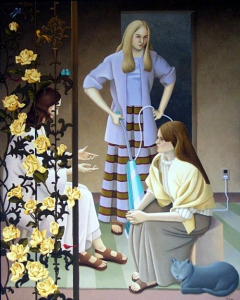 In Jesus time Martha would have been brushing and  today we use a vacuum, but that is where it ends. We still behave the same, always busy, distracted by the tasks of every day life.
Martha is distracted, preparing a meal for Jesus and his followers. she didn’t have the use of the mod cons we have to today ,the microwave or freezer. she couldn’t prepare the meal in advance given the hot climate. food had to be prepared and eaten straight away.
Can you imagine Martha getting more resentful as she works hard and Mary sits at the feet of Jesus, listening to his every word. I wonder is it because she wishes to be sat with Jesus or is it because as a female it is Mary’s duty as a woman to also look after the hospitality? Also Mary had crossed an imaginary line, she was behaving like a man. In that culture the house was divided into male space and female space, and male and female roles were clearly defined and this line shouldn’t be crossed. Mary had crossed it and Martha wasn’t happy. She was so upset that she demanded the Jesus make her sister help with the work.
His reply “Martha dear, you are fussing far too much and getting yourself worked over nothing” But  to Martha it wasn’t nothing, to Martha hospitality was important. After all, it was Jesus in their home and you feed your guest.
What is the first thing we do, we offer and cup of tea or coffee and maybe a biscuit or cake.I wonder would you want Jesus to turn to Mary and say “get up and help, do something”
The second part of Jesus’ reply “one thing only is essential and Mary has chosen it. It is the main course and won’t be taken from her”
Mary had chosen to listen, to take time to hear the words spoken by her guest, to hear his teachings, to contemplate on his words. Mary had gone beyond the business of serving to the service of contemplation.
Martha represents the active, women those who visit, extend hospitality, those who dedicate their time being Gods outward present, leading by example.
Mary a contemplative, stands for all those women who, when they hear Jesus speaking about the kingdom of God, know that God is calling them to listen carefully so that they can speak of it too. Mary sat at the feet of Jesus as his student, as   a would- be teacher and preacher of the kingdom of God.
Both active and contemplative are both important. Without, the first we wouldn’t eat and without the second we wouldn’t worship.
We should work hard ,but not too hard and should remember to to enjoy life that hes been given to us by the grace of God,too feel our place in the spirit. We should do the things we are called to do, no matter how difficult they are. At the centre of of this Mary/Martha or as I read  ying/yang is Jesus our Lord and Saviour – the person we should  spend time with when we can stop ourselves being  busy, for Jesus the reason we live life the way we do.
So was Mary one of the first feminist, I think she should be considered so. She crossed the line; she sat as the men did at the feet of the teacher,as a pupil to learn , as a would be teacher and preacher of the kingdom of God.
So what would you do, would you be doing the vacuuming or would leave it for another day and sit at the feet of Jesus. I know what I would do. Are you a Mary or a Martha ?